John Stuart Mill (1807-1873) wrote what has become one of the most compelling defenses of freedom of speech. In his essay, On Liberty, Mill argues that government has no right to limit the freedom of thought. He reasons that even a dissenting opinion held by a single individual has great value to society because it may turn out to be true. Humans are not infallible and thus a minority opinion must be protected or mankind will be “deprived of the opportunity of exchanging error for truth.” Mill also asserts that even false opinions have great value because they require that accepted truths that would otherwise be taken for granted be continually defended and developed, creating a “clearer perception and livelier impression of truth.”

On Liberty, Chapter 2: Of the Liberty of Thought and Discussion 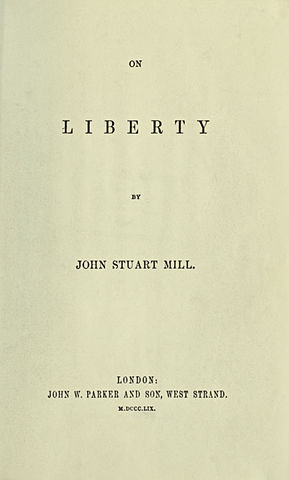 “The time, it is to be hoped, is gone by, when any defence would be necessary of the “liberty of the press” as one of the securities against corrupt or tyrannical government. No argument, we may suppose, can now be needed, against permitting a legislature or an executive, not identified in interest with the people, to prescribe opinions to them, and determine what doctrines or what arguments they shall be allowed to hear. This aspect of the question, besides, has been so often and so triumphantly enforced by preceding writers, that it needs not be specially insisted on in this place. Though the law of England, on the subject of the press, is as servile to this day as it was in the time of the Tudors, there is little danger of its being actually put in force against political discussion, except during some temporary panic, when fear of insurrection drives ministers and judges from their propriety; and, speaking generally, it is not, in constitutional countries, to be apprehended, that the government, whether completely responsible to the people or not, will often attempt to control the expression of opinion, except when in doing so it makes itself the organ of the general intolerance of the public. Let us suppose, therefore, that the government is entirely at one with the people, and never thinks of exerting any power of coercion unless in agreement with what it conceives to be their voice. But I deny the right of the people to exercise such coercion, either by themselves or by their government. The power itself is illegitimate. The best government has no more title to it than the worst. It is as noxious, or more noxious, when exerted in accordance with public opinion, than when in opposition to it. If all mankind minus one, were of one opinion, and only one person were of the contrary opinion, mankind would be no more justified in silencing that one person, than he, if he had the power, would be justified in silencing mankind. Were an opinion a personal possession of no value except to the owner; if to be obstructed in the enjoyment of it were simply a private injury, it would make some difference whether the injury was inflicted only on a few persons or on many. But the peculiar evil of silencing the expression of an opinion is, that it is robbing the human race; posterity as well as the existing generation; those who dissent from the opinion, still more than those who hold it. If the opinion is right, they are deprived of the opportunity of exchanging error for truth: if wrong, they lose, what is almost as great a benefit, the clearer perception and livelier impression of truth, produced by its collision with error.”

To Read More: On Liberty