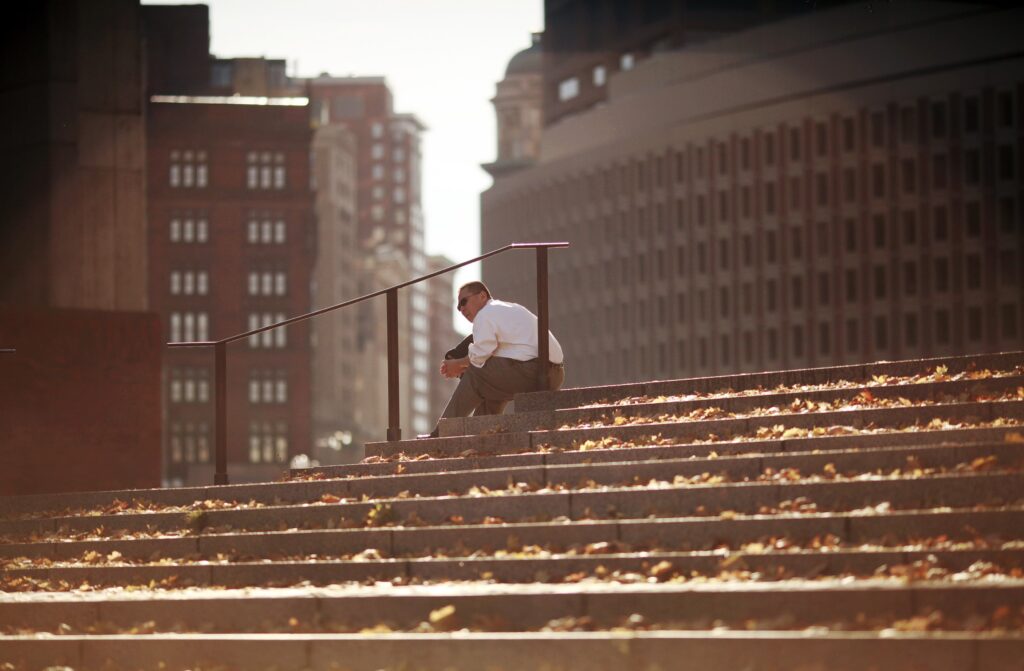 A man sits on the steps on a warm fall afternoon at City Hall Plaza in Boston, Massachusetts November 9, 2009. REUTERS/Brian Snyder

Boston’s City Hall has three poles that fly the American flag, the state of Massachusetts’ flag, and a rotating cast of flags from various organizations that apply to the city for permission.

In the past 12 years, 284 flags from events such as Veterans Day, Columbus Day, and LGBTQ Pride Month have flown outside city hall. During that 12-year period, only one flag has been rejected: a white banner with a red Latin cross from Camp Constitution, a nonprofit whose mission is to “enhance understanding of our Judeo-Christian moral heritage.”

The city of Boston turned down Camp Constitution’s request, saying that flying the flag would constitute endorsement of religion. Harold Shurtleff, the founder of Camp Constitution, filed suit, saying that Boston officials created a designated public forum when they allowed hundreds of different flags to fly on their flagpoles. He further accused city officials of viewpoint discrimination for targeting his group’s message while allowing others’ messages to be viewed on government ground.

Boston city officials countered that the government has carte blanche to decide which messages it wishes to support or not support. They argue that flags on city flagpoles constitute a quintessential form of government speech immune from further First Amendment scrutiny.

The city prevailed in both a federal district court and the First U.S. Circuit Court of Appeals. The First Circuit reasoned that the city engaged in government speech because the “city controls which third-party flags are flown from the third flagpole,” Judge Bruce Selya wrote for the panel. Selya further noted that “all 284 flags previously flown were flags of countries, civic organizations or secular causes.”

Shurtleff appealed, and the case made it up to the U.S. Supreme Court. The Justices now have the opportunity in  Shurtleff v. City of Boston to clarify when the government is engaging in its own speech or when it has created a type of public forum for free expression. The key question is whether a flag flying over one of the city’s three flagpoles represents the government’s own message under the “government speech doctrine,” which would be insulated from a First Amendment claim, or whether it constitutes a forum for another entity’s message under “the public forum doctrine.”

But, in the Boston case, if the Supreme Court  finds that the government turned its flagpoles into a designated public forum, then Shurtleff has a viable First Amendment claim for discrimination against his religious viewpoint.

Under the public forum doctrine, the government can open up or designate government property as a forum for free expression. But, if it does create such a forum, then it is limited in its power  to make content and viewpoint distinctions among speakers. In certaincircumstances, the government’s selective treatment of speech may rise to the level of viewpoint discrimination, what Justice Anthony Kennedy once referred to as an “egregious form” of content discrimination.

The city of Boston argues that flags on a flagpole are similar to monuments in a public park or specialty license plates on motor vehicles, which theSupreme Court has ruled are forms of government speech. The Court ruled in Pleasant Grove v. Summum (2009) that monuments in a public park were a form of government speech. This meant that city officials in Pleasant Grove, Utah, could place a Ten Commandments monument in the park without having to include a monument of “the Seven Aphorisms of Summum”, a much lesser-known religion than Christianity.

However, the Court cut back on the government speech doctrine two years later in a case involving the U.S. Patent and Trademark Office and Simon Tam, a musician that wanted to trademark his rock band’s name, “The Slants.” The patent office refused to register the name, citing the Lanham Act which prohibits any trademark that could  disparage…or bring…into contemp[t] or disrepute” of any living or dead persons.

In  Matal v. Tam (2017), the Court reasoned that the government violated the First Amendment in its refusal of the trademark. “The disparagement clause violates the First Amendment’s Free Speech Clause,” Justice Samuel Alito wrote in his opinion for the Court.“Contrary to the Government’s contention, trademarks are private, not government speech.”

The states, however, are divided on where to draw the lines between government and protected speech.  Kentucky and 11 other states wrote an amicus brief in support of Shurtleff, warning that “the Court must carefully scrutinize claims of government speech to prevent abuse.”

However, Massachusetts and nine other states authored an amicus brief in support of Boston city officials, arguing that “[t]hroughout history, governments have flown flags as a uniquely powerful means of sending a message.”  These states emphasize that the government speech doctrine must be applied broadly in order to give the government leeway to operate and function.

During oral arguments on January 18th,  the Justices pressed the attorneys on exactly where the line is between a public forum open to private expression and government speech free from scrutiny.  Justice Gorsuch asked perhaps the most probing question of all:

“What are the factors you think that we should be using to guide us in drawing that very difficult line between these two doctrines?”

Gorsuch’s incisive question shows how important the Court’s decision in Shurtleff v. City of Boston could be.  The Court could find that Boston city officials created a forum for free expression by flying hundreds of flags from private groups on its poles.  Or it could hold that flagpoles are not a public forum, but a venue for only government speech.

Or perhaps, as Justice Amy Coney Barrett suggested, the solution—at least in this instance—is for the city to have explicit rules about which types of flags can fly. “The City of Boston sits down, asks what’s going to be expressed and says, ‘Yes, this is an idea that Boston can get behind,’” she said during oral arguments. “And a government official participates in the flag raising, participates in the ceremony, communicating that, ‘Yes, Boston is happy to celebrate and communicate pride in Juneteenth, but, no, Boston is not going to participate in a flag raising for the Proud Boys.’”

Hopefully, the forthcoming decision by the U.S. Supreme Court will provide some much-needed clarity.  Until then, the line between the government speech and public forum doctrines remains difficult and uncertain to discern.

David L. Hudson, Jr. is an assistant professor of law at Belmont University College of Law, and the author of First Amendment: Freedom of Speech (2012). He is also  a regular contributor to First Amendment Watch.