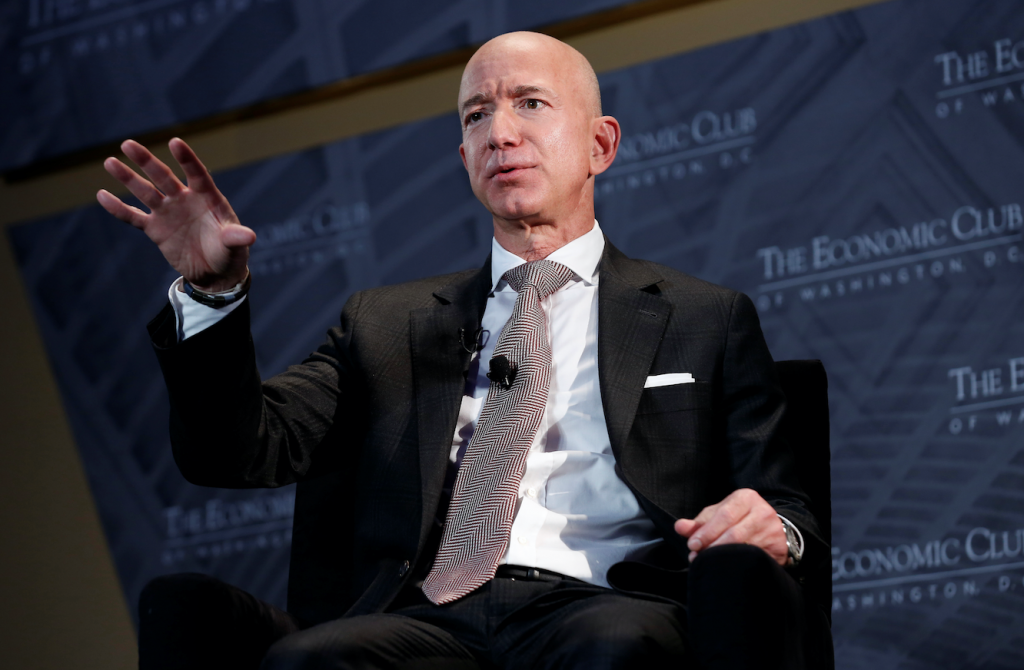 Jeff Bezos, president and CEO of Amazon and owner of The Washington Post, speaks at the Economic Club of Washington DC’s “Milestone Celebration Dinner” in Washington, U.S., September 13, 2018. REUTERS/Joshua Roberts

Make no mistake about it.  The First Amendment protects ProPublica’s publication of “The Secret IRS Files: Trove of Never-Before-Seen Records Reveal How the Wealthiest Avoid Income Tax” –a revealing expose of how billionaires Elon Musk, Jeff Bezos, and Warren Buffett pay taxes at an alarmingly low rate–certainly at a rate much lower than the vast majority of Americans who earn far less money.  ProPublica, which has garnered six Pulitzer Prizes since its founding in 2008, has just as much right to publish this document, as The New York Times and The Washington Post did in publishing “The Pentagon Papers” decades earlier.

Stephen Engelberg, ProPublica’s editor-in-chief, and Richard Tofel, the group’s president,  explained why they published the piece:

“Tax experts have long understood that the wealthiest Americans reap outsized benefits from the federal tax code’s emphasis on taxing income rather than assets like stock holdings and property. Yet, when The New York Times disclosed in 2020 that President Donald Trump had amassed so many deductions he paid no taxes in 11 of 18 years, it was assumed that his case was an anomaly, reflecting the unique breaks real estate developers receive under our tax system.

It is now clear that there isn’t just one such taxpayer — there are many, in multiple industries. We believe that disclosing the identities of billionaires who paid little to no taxes in years their fortunes grew by billions of dollars will help readers understand the magnitude of the tax advantages the ultrarich enjoy.”

Some may argue about the propriety of revealing this information, as a federal law makes tax returns private information and revelations of such data may trigger civil or criminal liability.   But, the law will punish the leaker, not the recipient. The IRS’ website provides that “IRC Section 6103 generally prohibits the release of tax information by an IRS employee.”  The independent journalism group was not the person that actually took the document, just as The New York Times did not steal the top-secret Pentagon study but received it from Daniel Ellsberg. In other words, the source – which ProPublica claims it doesn’t know – is the person who would potentially bear responsibility for unlawful action, not the publisher.

Consider the U.S. Supreme Court decision Bartnicki v. Vopper (2001). Someone illegally recorded a cell phone conversation between teacher union negotiator and leader Gloria Bartnicki and Anthony Kane. The unknown person then dropped off the tape to a radio personality Frederick Williams, a.k.a. Frederick Vopper, who played excerpts of the taped conversation on the air.

Bartnicki and Kane sued Vopper for violation of federal and state wiretapping laws, contending that he egregiously violated their privacy rights.  The Court cited the so-called “Daily Mail principle” from Smith v. Daily Mail Publishing Co. (1979)–that the press cannot be punished for truthfully reporting information that they lawfully obtained.  The Court emphasized that the press did not steal the material; rather, the press simply published information they had received. In the words of Chief Justice Warren E. Burger, “state action to punish the publication of truthful information seldom can satisfy constitutional standards.” The Supreme Court has relied on the Daily Mail principle in a string of cases involving the publication of sensitive information, such as the name of juvenile offenders, rape victims, and complaints against judges.

Still, there is the possibility that the affected parties may try to vindicate their interests in a civil action for invasion of privacy.  For example, they may sue for public disclosure of private facts. However, such a common-law privacy claim would run into a First Amendment newsworthiness defense. As the Court said in Bartnicki, “privacy concerns give way when balanced against the interest in publishing matters of public importance.”

ProPublica’s story presents newsworthy information of the highest order. This is not salacious information about private sexual materials–such as Gawker publishing private sex acts of Hulk Hogan.  Instead, this is a story about the fairness of our tax system. The story involves–to use key First Amendment lingo–speech on a matter of public concern.

ProPublica has admitted that they do not know the identities of the individuals who sent them the documents. That may soon change: the IRS is investigating the leak of the tax information to ProPublica. Whatever the results of that investigation, the person who blew the whistle provided the public with a bevy of important and revealing information about our tax system and the taxes paid by the mega-wealthy.

David L. Hudson, Jr. is an assistant professor of law at Belmont University College of Law, and the author of First Amendment: Freedom of Speech (2012). He is also a legal fellow at First Amendment Watch.