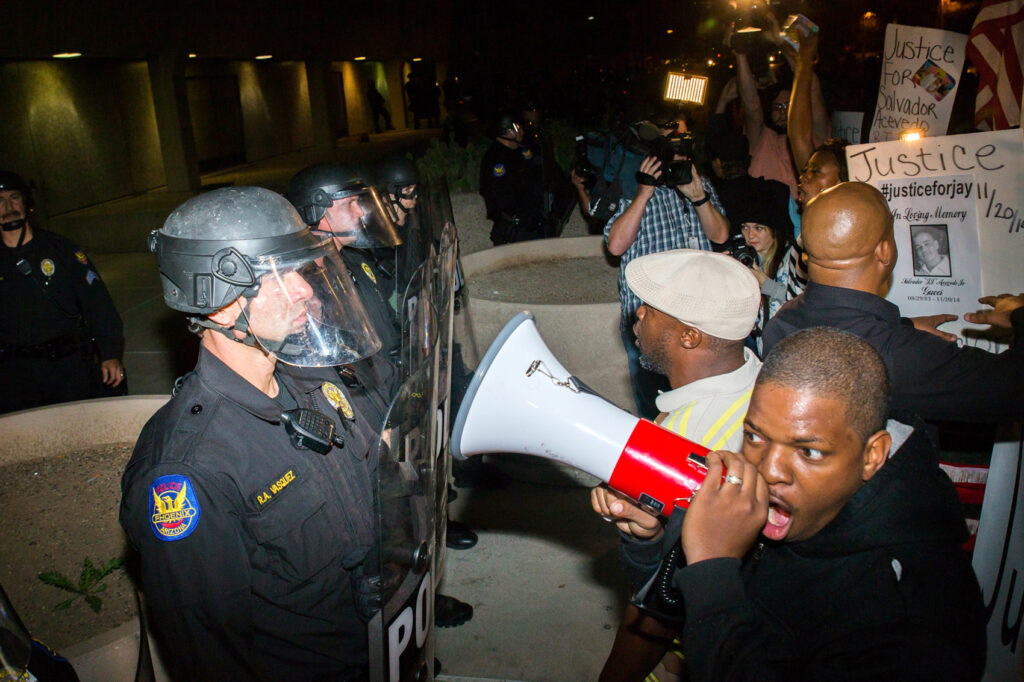 A federal judge granted a preliminary injunction blocking the enforcement of Arizona HB 2319, a law slated to go into effect in two weeks which would restrict recording of police officers carrying out their duties in public.

The law establishes that anyone recording video within eight feet from the scene of a law enforcement action in progress would have to move back if asked or face arrest and a fine.

The judge set a deadline of Sept. 16 for anyone who wants to defend the law to move to intervene in the case, according to Kelley.

“We’re elated that Judge Tuchi has blocked this unconstitutional law from going into effect. We’ve said from the beginning that criminalizing the video recording of law enforcement would not only interfere with journalists working to bring accurate information to the public but also would violate the First Amendment rights everyone enjoys to record these government workers doing their jobs,” Kelley told First Amendment Watch.

Last week, Arizona Attorney General Mark Brnovich filed a motion of non-opposition to the request for preliminary injunction by stating that his office was not the proper office to defend the merits of the law. He stated he would “provide notice to the President of the Arizona State Senate and the Speaker of the Arizona House of Representatives that local and county prosecutors are the proper entities to defend the statute.”

The alliance of Arizona news organizations, press associations, including The Arizona Republic, the Arizona Broadcasters Association, the National Press Photographers Association, as well as the ACLU of Arizona, joined forces in opposition to the law signed by Gov. Doug Ducey in July.

Chris Kline, the CEO of the Arizona Broadcasters Association, called today’s ruling a victory for professional and citizen journalists. “We all have a First Amendment right to document what’s happening around us, and had this new law been allowed to go into effect, it would have criminalized the very act of journalism in many situations,” Kline wrote in an email.

The request for a preliminary injunction argued that the law is a content-based restriction on speech and would have a chilling effect not only on the First Amendment activities of visual journalists “whose job it is to document the newsworthy activities of public servants in public places” but would also affect the general public who “simply wants to record what law enforcement officers are doing.

“It independently violates due process because it is too vague to allow people to understand precisely how to avoid violating it and gives police unfettered authority to halt recording and arrest people simply for exercising their First Amendment rights.”

In today’s order, Judge Tuchi writes, “Because there is a clearly delineated right under the First Amendment to record law enforcement activity, Plaintiffs next argue that HB2319 is a content-based restriction and is therefore subject to strict scrutiny. (Doc. 24 at 10.) The Court agrees.”

Kavanagh said the bill wasn’t written to target the work done by journalists as “professional journalists don’t walk up within a couple of feet of a cop who’s frisking somebody. It’s not done. But they don’t want to be told what to do. I understand that.” However, the need is real, he says, due to organized groups throughout the country that follow police officers or respond to radio calls. “They walk up within a foot or two of the cop who’s involved in the encounter and the cops were complaining…And then in February or March, several months before the session, I got a phone call from a cop in Tucson and he said, ‘You’ve got to help us….They get to the scene, they stand one foot behind us filming and we don’t even know who the hell they are.’”