2017 Has Been A Year of Challenges For Artistic Free Speech 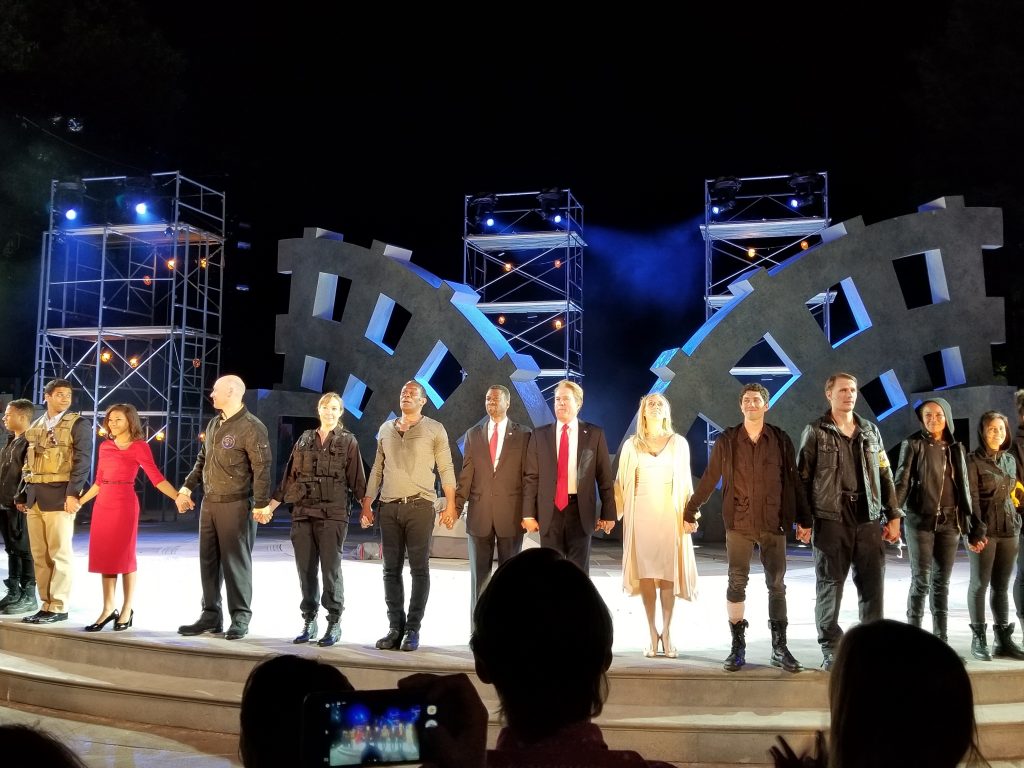 From comedian Kathy Griffin posing with a severed head of Trump, to the Public Theater depicting the death of a Trump look-alike in Julius Caesar, 2017 has been a year where the arts have pushed the boundaries and come under fire. The threat of government censorship is not new. In 1873, under the Comstock Law a reported 194,000 “questionable pictures” and 134,000 pounds of books of “improper character” were destroyed. The 1996 Communications Decency Act put restrictions on internet communications. A few years later, New York Mayor Rudy Giuliani threatened to cut funding to the Brooklyn Museum over exhibits displayed “sick stuff,” as he called it. What does artistic freedom of expression mean under the First Amendment? Should Kathy Griffin been forced to apologize for her art?  The Public have protestors rush the stage or artists have to give up their beliefs for their art?

The University of Kansas removed an altered U.S. flag that was flying on campus as part of an art exhibit amid criticism from politicians, including the state’s governor. The flag, called “Untitled (Flag 2)” was part of the nationwide public art project “Pledges of Allegiance.” This flag was an American flag with an outline of the United States in dripping black paint and a black and white striped sock. The flag was on display since July 5, but was removed a week later shortly after the governor spoke with the KU chancellor.

One tweet read: “I have the first amendment right to put out these images. People may not come to my shows, they may not buy my books, but I have the right. It was just plain wrong for the President of the United States to use his power to come after me or anyone else he is offended by.”

First Amendment Watch does a complete analysis of Masterpiece Cake and the First Amendment implications of the artistic freedom of expression argument.

Photographer Tyler Shields has never shied away from controversial photo shoots, but even he was surprised by the violent reaction to Kathy Griffin’s severed Trump head.

Free speech groups slammed a public school district in Mississippi for removing Harper Lee’s To Kill a Mockingbird from its curriculum because the Pulitzer Prize-winning novel contained language that “makes people uncomfortable.” The novel – published in 1960 – is about a black man facing false allegations of rape in Alabama.

The faculty at Yale University’s Department of the History of Art were criticized for failing to condemn the university’s decision to relocate an stone carving featuring an armed Native American and a Puritan. Art activists said the art historians’ silence offered tacit support to the university’s supposed censorship.

After months of backlash, a federal investigation as to whether her actions were a threat to President Trump and an initial apology, Kathy Griffin claims she is subject to intense bullying and she believes she should be able to express herself without sanction.

Kathy Griffin should be ashamed of herself. My children, especially my 11 year old son, Barron, are having a hard time with this. Sick!

The Hill The Cut
August 18, 2017: President Trump’s Committee on the Arts and Humanities Resigns Post Charlottesville

In a strongly worded letter to President Trump, arts committee members wrote “reproach and censure in the strongest possible terms are necessary following your support of hate groups and terrorists who killed and injured fellow Americans in Charlottesville.” The administration stated it had planned to disband the committee.

Politico
August 15, 2017: President Trump Asks If Washington and Jefferson Monuments Are Next Targets

In a combative news conference on Monday, President Trump addressed the deadly protests in Charlottesville and commented on the removal of Confederate symbols. “So this week, it is Robert E. Lee. I noticed that Stonewall Jackson is coming down. I wonder, is it George Washington next week? And is it Thomas Jefferson the week after? You know, you really do have to ask yourself, where does it stop?,” Trump stated. Thursday Trump tweeted that he was “sad” to see the monuments go.

Sad to see the history and culture of our great country being ripped apart with the removal of our beautiful statues and monuments. You…..

NPR reports “The uproar over the New York Shakespeare in the Park production of Julius Caesarhas spread to other cities. And it appears to be only because they are companies with the word “Shakespeare” in their name.”

A statement from National Trust for Historic Preservation President Stephanie Meeks addresses the balance of preserving history and removing its markers. “These Confederate monuments are historically significant and essential to understanding a critical period of our nation’s history. Just as many of them do not reflect, and are in fact abhorrent to, our values as a diverse and inclusive nation. We cannot and should not erase our history. But we also want our public monuments, on public land and supported by public funding, to uphold our public values,” she writes.

At the opening night of the Public Theater’s Julius Ceasar, director Oskar Eustis, urged theatergoers to record and share the performance because “When we hold the mirror up to nature…often what we reveal are disturbing, upsetting, provoking things. Thank God. That’s our job.” The depiction of Julius Ceasar as a stand in for Trump did indeed provoke, causing protestors to rush the stage at certain performances and a large social media backlash. Laura Loomer was one of the protestors who jumped onto the stage just after the assassination of Caesar and began shouting, “This is violence against Donald Trump.”

New York Times  New York Times
June 12, 2017: Five Years Ago, an Obama-like Julius Ceasar Did Not Cause A Stir

Is there a double standard when it comes to artistic freedom of expression on the left and on the right?

In its Nation’s Report Card, the National Center for Education Statistics found US students underperformed in visual arts and music. Funding cuts proposed by the Trump administration would worsen the situation.

In his first budget as president, Donald Trump outlined a spending plan that eliminates federal funding for agencies supporting arts, humanities, and public media. Under the president’s plan, funding for the National Endowment for the Arts, the National Endowment for the Humanities, and Corporation for Public Broadcasting will be scrapped. Art groups have criticized the plan, arguing that the budget cuts threatens artistic expression.

In one of the more prominent examples of threats to free expression by the government, then New York City Mayor Rudy Giuliani, offended by a painting of a dung-stained Virgin Mary displayed the Brooklyn Museum, threatened to cut city funding. If Giuliani had followed through, he would have actively sapped one-third of the museum’s operating budget.

For as long as there have been artists, there has been censorship. In the United States, a number of Supreme Court cases have addressed the tension between artistic tension, First Amendment rights, and aggressive or violent speech. This also ties into a consistent tug-of-war between arts funding advocates and the federal government; the former argue that financing the arts is a key component of championing free speech. For example, in the 1990s, the National Endowment for the Arts (NEA) was attacked for funding work by controversial artists, photographers Andres Serrano and Robert Mapplethorpe. Congress countered by dictating that the NEA operate so that “artistic excellence and artistic merit are the criteria by which applications are judged, taking into consideration general standards of decency and respect for the diverse beliefs and values of the American public.” The case went to the Supreme Court in 1998, where it was ruled that Congress’ restriction on the NEA is constitutional.

This  case sprung from the Brooklyn Museum’s funding showdown with New York City Mayor Rudy Giuliani. The museum filed a federal suit to prohibit Giuliani from withdrawing the city’s financial support of the museum. The court issued a preliminary injunction against the city, explaining that the city violated the artist’s — and the museum’s — free-speech rights; the court’s injunction also implied that the city potentially violated the Establishment Clause. The city ultimately dropped its appeal.

Miller v. California redefined the federal legal standard or obscenity. Previously, the standard had been “utterly without socially redeeming value.” This case shifted the standard to “serious literary, artistic, political, or scientific value”.This case was the harbinger for the famed “three-prong standard” for determining whether or not content is obscene.

Karen Finley and three performing artists sued the NEA following the 1990 amendment of the body’s decision guidelines to include consideration for “artistic excellence and artistic merit” based on “standards of decency and respect for the diverse beliefs and values of the American public.” Finley and the artistes had previously suffered a funding rejection and they argued that the NEA’s amended guidelines were unconstitutional and violated their First Amendment rights. After the district and appellate courts affirmed Finley’s arguments, the Supreme Court ruled that the guidelines were constitutional.

January 16, 2016: A Look At Art Censorship from Michelangelo To Today

After the Charlie Hebdo massacre in Paris, the Huffington Post takes a look at how censorship has evolved over the centuries.

The Atlantic reviews how censorship lines were crossed and change was driven in the 20th century.

A synopsis of the Brooklyn Museum’s late 90s free speech conflict with New York City Mayor Rudy Giuliani. which focuses on the flawed ways in which Giuliani referenced the obscenity standard generated by the 1998 U.S. Supreme Court decision in NEA v. Finley.

For further reading the ACLU and Newseum have interesting primers.

October 13, 2017: The Guggenheim Is Faulted for Censoring Art Exhibit

The New York Times Editorial Board argues that the Guggenheim Museum should not have pulled its exhibition “Art and China After 1989” which included disturbing portrayals of live animals. The exhibit spurred protests by animal rights activists leading the museum’s director, Richard Armstrong, to shut it down for fear for violence. The Times argues that thought protecting staff and visitors is important, there were other ways to do so and not self-censor.

Yu Jin Ko, a professor at Wellesley College, argues that the debate over The Public Theater’s production of Julius Caesar “is marked by sententious sound bites that distort and enflame more than they than inform or promote understanding—the very same kind of rhetoric that paved the road to political violence and tyranny in the play.”

Michael Cooper explores the controversy over Julius Caesar over the years.

Teen Vogue writer Lauren Duca writes in a Teen Vogue op-ed that Kathy Griffin’s Trump head stunt may be “gross” but asks when did shaming and Corporate America drive the conversion over art and public discourse.

Teen Vogue
January 18, 2017: The Threat of Self-Censorship May Rise Under President Trump

Author Margaret Atwood looks at how artists have been suppressed over time and considers what artists are up against today. “And what will happen to freedom of speech, that hallmark of American democracy? Will the very idea become a euphemism for hate speech and Internet bullying, a hammer to whack “political correctness”? That has already begun. If it intensifies, will those defending the concept of free speech then be attacked from the left as collaborators with fascists?,” she asks.